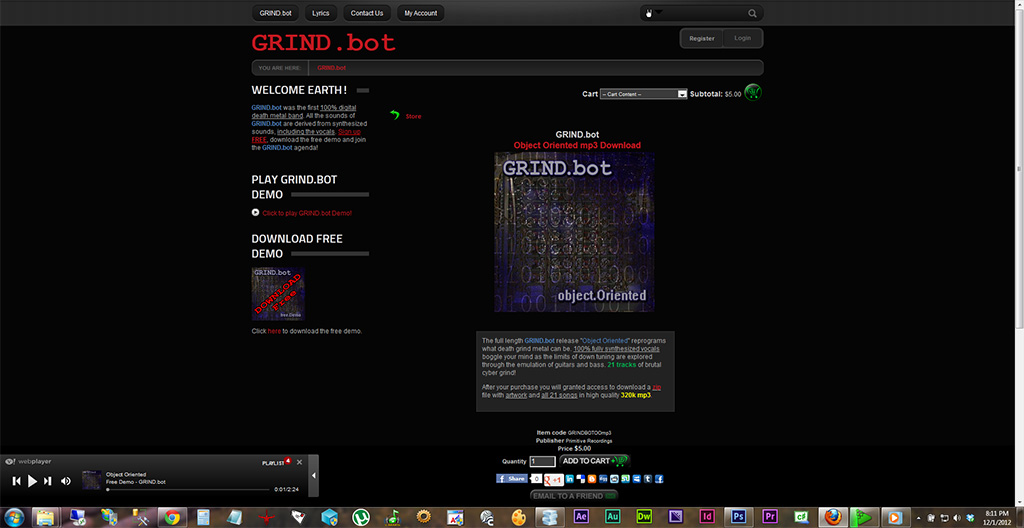 I have many side projects besides what most people know of. Your average fan of Mortician is aware that I was in Malignancy for quite a while and even some know that I am KOM2 of Prosthetic Cunt (have I mentioned that ever? Well there it is.) Every once in a while I bug out and just write an entire album’s worth of material in a particular genre. Then I’d make a copy for my buddies Danny Nelson, Sam Inzerra and maybe Will Rahmer too if it’s something he’d be into. Then usually that’s it. That was the case with Primitive Brutality for years only Danny and Will had a copy of it and maybe a few random friends had dub tapes of a song or two. So what the fuck does it all mean…

Well, GRIND.bot is one of those projects that I did back in 2006 when I had injured my wrist pretty bad doing some bullshit work on my car (it absolutely wasn’t because I punched someone’s head the day before). I was a little worried about playing guitar and I took quite a while off from playing. I started fucking around with Fruity Loops and some of the synthesized guitar sounds. I was surprised at how weird and cool I could get it to sound. Then I discovered the speech synthesis capabilities and it was all over. Paired with a pitch shifter and a love for nerd metal… GRIND.bot was born. It was really comforting to know that I could make some kind of metal music using a mouse if I were to not be able to play guitar anymore.

Enough of my babbling. Go to the GRIND.bot website and listen to the demo free. If you like it buy it for $5.00 and I maybe I wont be such a dick and I’ll be motivated to post more things I’ve done to the intertubes.