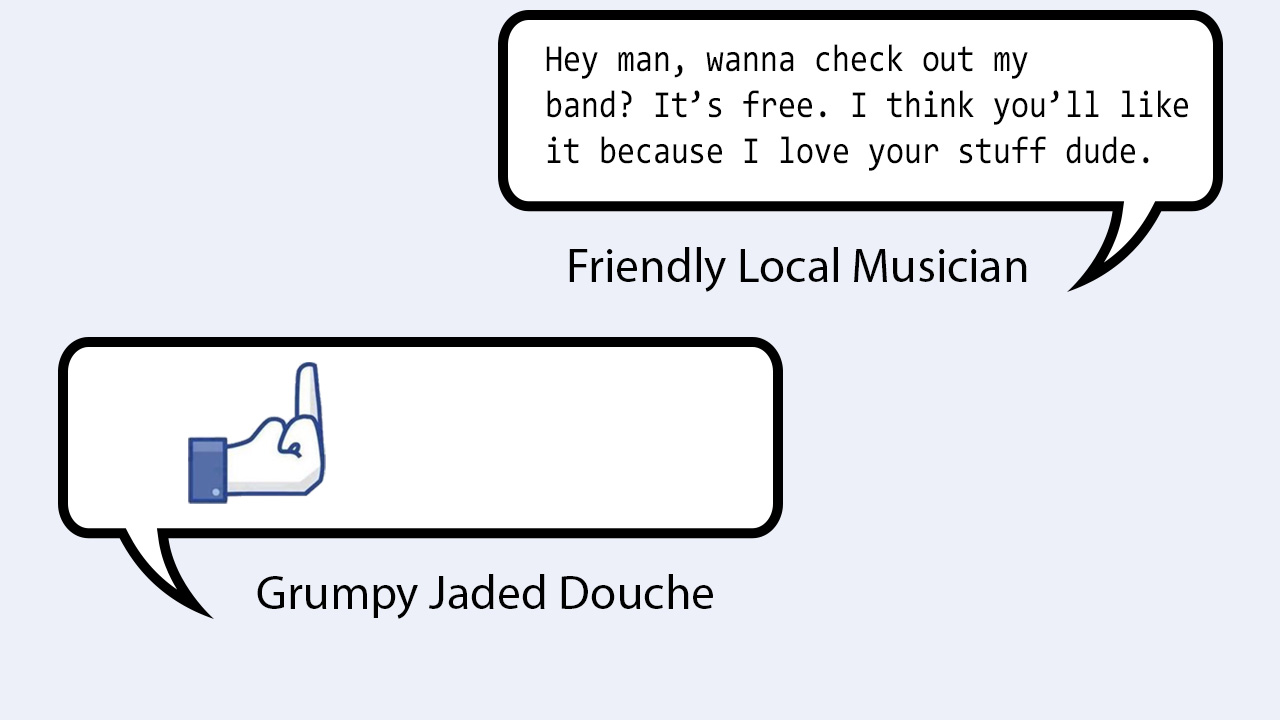 The metal scene will always remain underground because of the large amount of people in the scene that act like trying to lay new music on them is some fucking shitty thing to do. Fucking weird to me to see post after post on social media hating the idea of someone trying to share their tunes. Some people even have a sort of public statement on their profile telling bands they will be ignored. Man that’s weird to me.

Perhaps it’s for the best. Perhaps the music that deserves to be heard is eventually heard by those that seek it and are grateful for that buzz that comes with discovering new tunes that “do it for you”. I think the same people that can’t be bothered with new tunes are just afraid of new shit in general. Maybe there’s the “too much” argument and I’ve been guilty of that myself, not knowing where to begin sometimes. There’s also the “shit sucks now” argument which I don’t buy since the majority of shit has ALWAYS sucked, nothing new there. Part of the underground used to be buying 10 albums and hoping that 2 don’t suck. If 3 were good it was a score. Now shit is free to listen and people are like “fuck off with that”. Then if they do like it, they fucking download it and come to your show with a photocopy labeled CDR of their download asking you to sign it while wearing their bootleg shirt of your band (true story).

There’s also the bands themselves to blame. Unfortunately I hear a lot of this “I don’t wanna hear new shit” talk from people in bands. WTF? Did you not remember how your band got where it is? From fucking tape trading, snail mail, handing free shit out, playing live for nothing to people who don’t know you? Man, what happened to listening to a band and saying “we gotta bring them on the road with us” instead of some weird competitive thing or just a blanket non interest? Now it’s some weird pay to play thing a lot of the time too. When Mortician was active and doing headlining slots we always picked our openers because we liked the guys. Also it’s amazing how quickly someone can forget that a simple “yeah I dig it man” from someone that you gave a demo to can mean the world to the artist that gave it to you. Never mind you might actually find the next thing you fucking love and will be listening to for weeks or even years. I still listen to demos from forever ago and some of my favorite CDs are of old demos. Bands helping other bands out used to be such a big part of the scene with everything from trading to gigs, not so much now.

I do have to ask myself to be fair is this like the news where we are just more aware of people’s real attitudes? Was this all hidden in the past behind a denim jacket and some patches? Is it just that people are more vocal about their unwillingness to give new stuff a chance? Are people just more jaded now about it because of the quantity of music? Are they trying to be “too cool for the room”? I got no fuckin’ idea honestly. I don’t think like that. I don’t want to sound like a saint either above it all, I for sure have been through my years where I just didn’t get into anything new because I’m either in a weird place of mind or honestly because I’m in writing mode. I will admit I try to stay away from anything if I’m writing music (which is often) so that I don’t unintentionally “lift” any riffs or styles. It’s hard to not be the sum of your influences and maintain your originality as it is, so sometimes I do avoid new stuff for that reason. After writing something though I usually have a burst of searching for new shit and end up finding something new that I keep in my music rotation forever. What the fuck was this post about? Oh yeah… 😛

So, yeah, the underground death metal scene will probably always remain underground (no shit right) and maybe that is a good thing. Maybe it’s because people are people and you’re not going to change them. Maybe it’s because we’re all dysfunctional in this scene. Although, there is a ton of new blood in the scene all the time that eventually gets filtered after a few years. Then you get to see who’s left standing and you know who’s in it for the long haul and who was just a weekend warrior in the first place. Also very easy to spot those dudes that come back when the scene is thriving and are nowhere to be found when it’s not. For those of us here from the beginning who remember what the scene was like and what it was like to promote your band before the internet it is a circus now and as amusing as it is sad to watch what it’s become. I’m drifting again (shocker)…

In any case, I urge everyone to share some new music with a friend today, often in fact and don’t let them give you any shit that they don’t like new shit or that new shit sucks. Punch them in the shoulder hard if they give you any of that shit and remind them that they’ve become a pussy. They will thank you later.