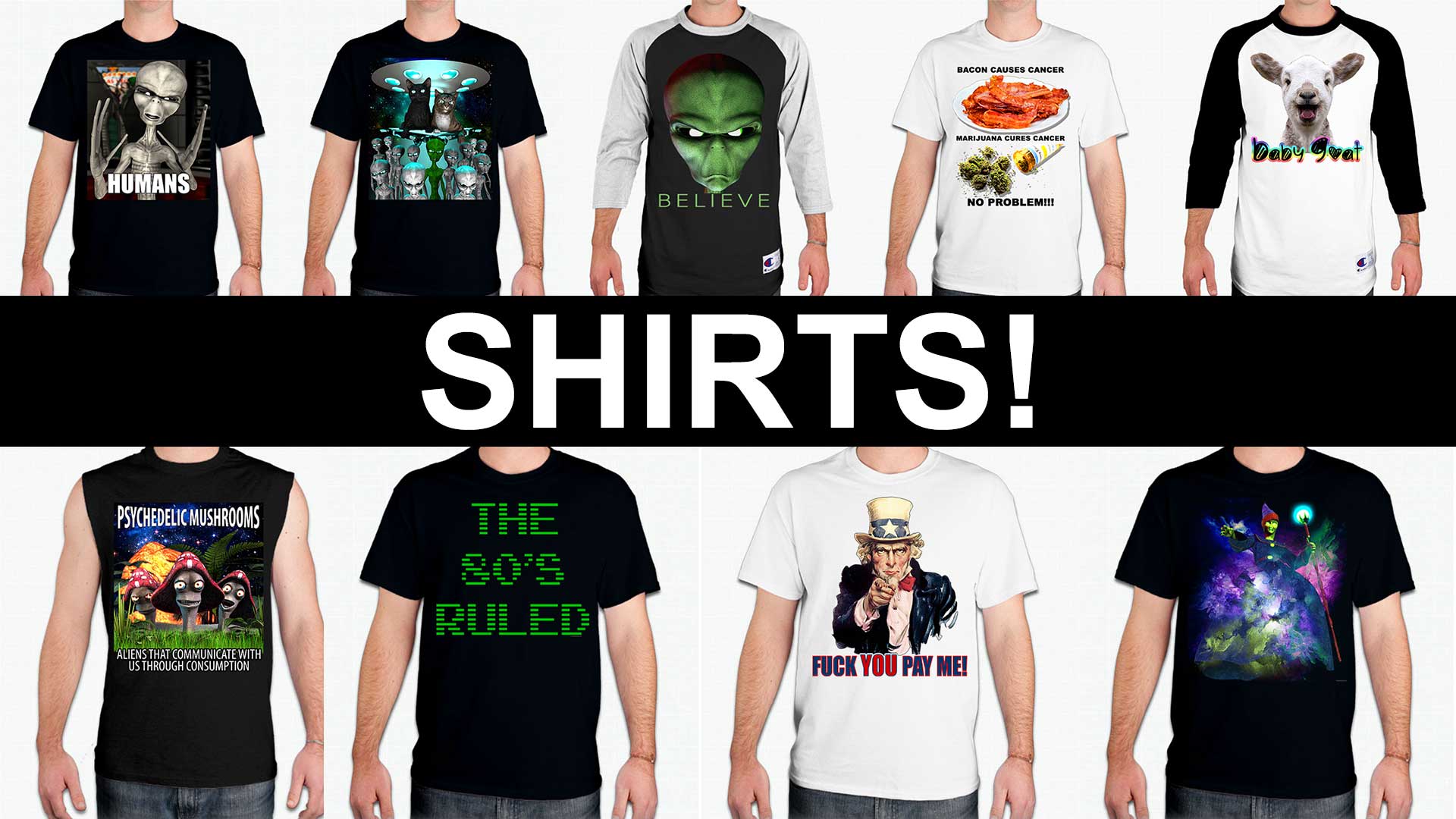 Lately I’ve been having a lot of fun getting a bunch of t-shirt designs together for GetShirtsPrinted.com I’ve been resurrecting some old designs and creating all new ones. I’m very excited about the ability to do one offs that are quality with today’s DTG printers. I invite you to check out some of my prints below with some “how I did them” info and some obligatory general ramblings.

A little history behind GSP first. I’ve actually been in the printing business in one form or another for the past 30+ years (yeah, I’m old). I’ve owned GetShirtsPrinted.com for about half that and even had it up for some of the early 2000’s doing prints for the general public. After some changes in my living location and home situation (took time off for my girl to deal with her health) I shut the website down until I was able to offer what I always wanted to offer through direct-to-garment printing.

Now with the current technology, DTG printed shirts are really “there” in terms of cost and quality. It is a very exciting time in garment printing indeed.

This design was one of the first designs in the initial batch of GSP shirts. The image was from a semi-popular MEME I made for Facebook when the news was all the rage about bacon causing cancer, right on the heels of the news that marijuana was found to have cancer fighting properties. In any case, it makes for a fun shirt and sends a positive message… I think. No, I’m sure of it. It says “don’t believe anything you read or hear about fully”. It says “I don’t accept the mainstream monopolized news that’s force fed down my throat!” It says… it says… it’s got weed and bacon on it, do I really need to say more? You need this shirt!

Who doesn’t like baby goats? I know I love them and they truly give cats a run for their money in the fun department. Go ahead, I dare you to watch a “baby goat running around” video on YouTube and not enjoy that time. You know you will. That or you have a blackened heart that is incapable of enjoying the beauty of natures creatures, you probably don’t have a girlfriend/wife or have a damaged relationship or more likely “series” of damaged relationships behinds you and will ultimately end up living alone, bitter and angry about your life only to die quietly without notice, not even devoured by any pets because you are cold and don’t have any. Change all that crap now and start by grabbing this baby goat shirt and wear it to a local farm or petting zoo. Don’t be a dick to the goat either, be patient… your damn life depends on it.

Psychedelic Mushrooms: Aliens that communicate with us through consumption

This was a real fun design and the first that I did for this initial “new” batch of designs using Carrara from Daz3D. I’ve been dabbling with 3D for well over 2 decades and have been through a bunch of different software over the years including 3D Studio Max, Adobe Dimensions (ewww), Ray Dream Studio, and a bunch more. For my money and for the cost of readily accessible easily modifiable models Carrara Studio Pro works best for me. It doesn’t get the attention it deserves these days over at Daz3D but even if another version never came out and the current set of models were all you had, you’d have all you ever would need. Luckily, it is compatible with the Poser format for models as well as obj and most other formats. Oh, and yeah, mushrooms are totally alien beings that came here on meteors and communicate with us when we eat them. Don’t believe me? Then you have not had a psychedelic experience my friend and you are truly missing out on one of life’s most amazingly unique experiences that connects you to me, to everyone, to your ancestors from 1000’s of years ago, to your unborn descendants, and beyond.

I’m a fan of aliens. Aliens are fans of mine, so it all works out nicely. Are you a believer in the “phenomenon”? Have you had your own encounter? I’ve seen at least 2 things in the sky I can’t explain in my 44 years on this earth, I’ve also spent a little more time than the average bear watching the sky. Anywho, this is my good friend KOM2 on this shirt entitled “BELIEVE”. I remember when I was talking to him about “getting the band together” so to say with GSP he said “leave me alone, I’m on Facebook living vicariously through strangers’ profiles.” Right after he said that I snapped a quick pick on my phone of him and made this shirt with it. He’s pretty pissed at me but what can I do, what’s done is done. You either “BELIEVE” or you don’t and you’re stupid. I for one am a complete believer that this is all ridiculous.

Ahh, yes… I remember the day I made this design. I was thinking to myself “self, what can we do with a public domain image that is a unique design that we can make our own”. It was a fruitful conversation in my head and right away I knew the direction I wanted to go was political. So, who else better to snag for a design than “Uncle Sam”, our country’s lovable, sorta angry and disappointed in you looking, public face for “the government”. You know, because it’s a good idea to make the government seem like a powerful person instead of the group of representatives it’s supposed to be. Ha hahaha, that’s all crap. This guy is coming for your money no matter what political party you cling to with a passion only rivaled by your hate for anyone “d’ferint”. Go ahead, grab this shirt and wear it at your next political function and it will simultaneously help me to afford to write more songs about how I hate politics.

You’ve all seen the famous MEME of the guy with the crazy hair talking about “aliens”. You haven’t? Holy crap, what app are you wasting your time reading news on that you haven’t seen that dude. Alright, whatever. Maybe this shirt’s not for you then. Or maybe it is, I can’t tell you who you are only you can answer the question of who you truly are. Anyway… my good friend KOM2 recommended his buddy LSC-25 to pose for this parody shirt of that famous MEME and he delivered with flying colors or whatever nonsense you want to say that refers to it in a positive light. There’s even a picture in the background with KOM2… not that that has any relevance whatsoever to anything I’m trying to convey here. Just get the shirt so I can afford to make more shirts and write more stupid crap here.

Simple as that. I used Carrara for this one and the Michael model with the creature add ons. Lot’s of possibilities with that stuff. Add a custom shader and some creative fun with filters on some public domain nebula pics and there you have it… a space wizard. I’m not sure what he’s doing in space but I guess that’s his thing. He’s just floating out there with his magical staff and his hipster wizard hat. I didn’t give him a beard and wonder now if I should… nah, screw him. No beard for you. Just some glowing eyes which I’m a fan of in any fantasy world. I often say “give me some glowing eyes on a sick ass character” and then I’m told to leave the Wal-Mart dressing room…

Oh man! What a perfect marriage of my favorite two things… cats and aliens. This one I’m real proud of. It’s done in Carrara again and uses quite a few models including the Millennium Cat with some custom textures and the very awesome Alien model from Sixius. I have really gotten a lot of mileage out of my purchase of these models and I’m sure there’s still plenty of miles left! This one features another great public domain space image for a background with some more filter fun applied in Photoshop. Not too much done in post on this besides that background, mostly right out of the renderer. Like I said I really like this design and the direction I’m going with this one. Giant cats should be worshiped by little aliens and paraded around on anti gravity floats. Just bliss.

After all that work on the last shirt (Cats and Aliens) I said you know what, let’s do something  little simpler 😉 So, simple concept here. I found the perfect 80’s video game font with the proper looking scan lines and came up with a couple fun things to say. I’m sure I’ll come up with a few more as the brain rattles around and remembers things and experiences new stuff and puts together a new thought… or something like that… maybe… I don’t know why are you still pestering me here. Haven’t I shown you enough designs? Don’t you get it that I’m having fun and trying to provide a cool product and maybe make a buck or two? Jeesh what more do I have to do? New Mortician album? Yeah, yeah, I know. I haven’t heard that one before. Uh, oh, I’m doing that rambling thing I do where the post goes completely off the rails and speaks to that 1% of you that read all the junk I post. I love you too guys… I love you too.

Now… away with me! Time for my mush…

Stay tuned to the same bat channel for more posts featuring ramblings about new designs that I’ve come up with. And by all means post your ideas to me and I will make them.

You can also always go straight to GetShirtsPrinted.com to see my latest stuff available.