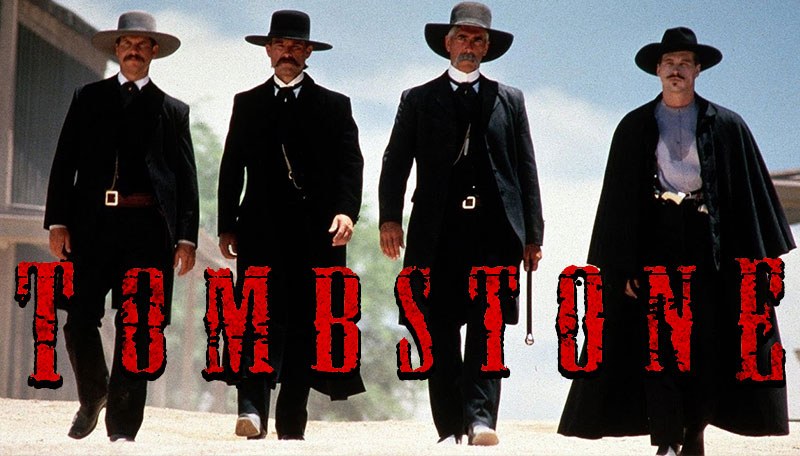 Do you like westerns? Me neither. Not really at least. There’s a very small number of exceptions to that rule. Tombstone is one of them. If you hate westerns but you still love great story telling and performances then you should give it a watch. Hell, if you like westerns give it a shot.

Tombstone is the true story (sort of) of Wyatt Earp, his brothers, Doc Holiday, and the cowboy outlaws they encountered when they settled in Arizona to make their fortunes. Wyatt Earp was a legendary law man of the old west with quite the colorful back story. The other film that came out around when Tombstone did called “Wyatt Earp” staring Kevin Costner details Wyatt’s earlier years more. Tombstone really focuses on the gunfight at the OK Coral and the events immediately after.

I won’t offer any spoilers here and my reviews are really more recommendations so go watch for yourself and you’ll be treated to some fantastic performances from Kurt Russel in the lead role and Val Kilmer as the ever so eloquent Doc Holiday. Val really delivers a stellar performance in this one. I think I might have had a couple of drinks too many a few nights back when this came out and perhaps might have adopted the drunken Doc Holiday persona more than I’d like to admit 😉

There’s also some great extras on the Blu-ray and DVD special editions. Be sure to watch the featurette and deleted scenes. All worth it. Check out some cool scenes from Tombstone if my gibberish hasn’t convinced you.

UPDATE: Someone was nice enough to upload the “Making of” featurette to YouTube. Enjoy.