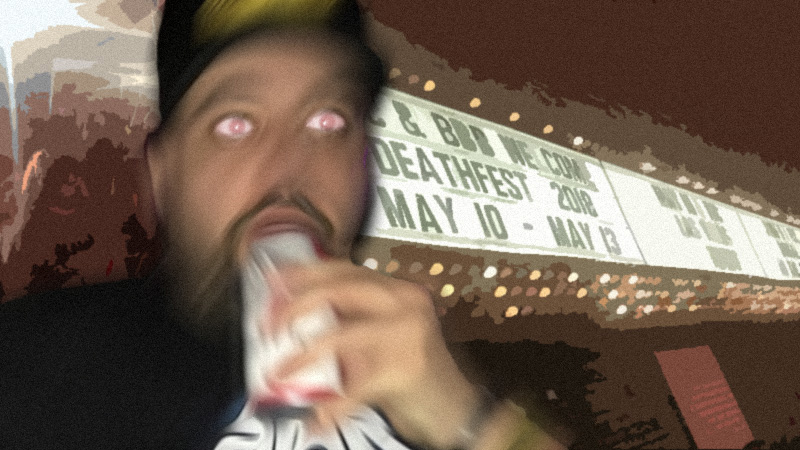 Last time I was babbling at you about “the scene” I emphasized the camaraderie among metalheads as being one of the highlights of being a part of it and that belief was once again validated this past weekend at the Las Vegas Deathfest 10. It’s hard not to have fun at a metalfest and it’s almost impossible not to make memories at one in Las Vegas, America’s playground. Most fests suffer from having to shut down early, nothing to do in town, and almost all give you the boot right away with nothing else open near the club. Not in Vegas. You can start your party at 3AM.

Am I just going to babble about LVDF 10? Maybe. Fuck you, it’s my website. If I were pressed to take something negative away from the experience maybe it would be that it’s a little sad that metalheads can’t support local shows like they do the fests. Believe me I understand that we all have lives too, so I do get it. It’s hard sometimes to get out. I’m a victim of having to put family before shows many times. Hopefully not too much longer though as my girl’s daughter is off to college soon and we are never waking up early again! 🙂

If you asked me what positive things I took away from the fest I’d probably start with the fact the scene is still quite alive if you provide the proper line up, atmosphere, and promotion. I am fortunate enough to be good friends with Big Mike who runs the fest and have a bit of insight as to the operations behind the scenes and I can tell you quite a few people come together to make the party of the year come together. I’m glad to do the few things I get to do to help like carting bands and friends around when in town making sure that everyone can get the things they need and not have to deal with cabs or shuttles. Makes me feel like I can still give back to the scene a little and this is good.

Of course the fest was awesome as a show, which is of course what it’s mostly about. All the bands kicked ass with a few standing out. I’ve been lucky enough to see quite a few gigs in my time and some of the bands like Incantation and Cephalic Carnage while I’ve seen them countless times back in “the day” it’s been a while since I’ve seen either and it was great to see them still kicking ass and sounding as sick as ever.

I had many opportunities to catch up with a bunch of old friends. I missed some connections with others as it’s a big fest and everyone is spread out. It’s easy to get lost in the Freemont Street mayhem 🙂 I also was running around a bit so I missed a little bit of Saturday and some peeps I wanted to hang with were only in town for a minute. All in all I was happy to catch up with those that I did and hopefully will be able to maintain those connections beyond the fest.

Yes we smoked a lot of pot. Actually you can’t smoke in the open in Las Vegas so this is all a fictional story that I’d like to tell 😉 Once upon a time… we all smoked a bunch of weed out back of the venue. Truth be told, no one got hurt. Maybe some stomach aches because there was a bacon themed food truck near the smoke are… sorry, the merch area. I personally love the idea of fests where you can get out and get some air while socializing with friends you haven’t seen in a long time.

So is this all some nonsense about my personal experience at LVDF 10? Sort of. Fests are where the scene is most alive these days. It brings us all together and reminds me about the most important part of the scene… the fans and the bands.

3 thoughts on “Ramblings of an “underground musician” Part 2”