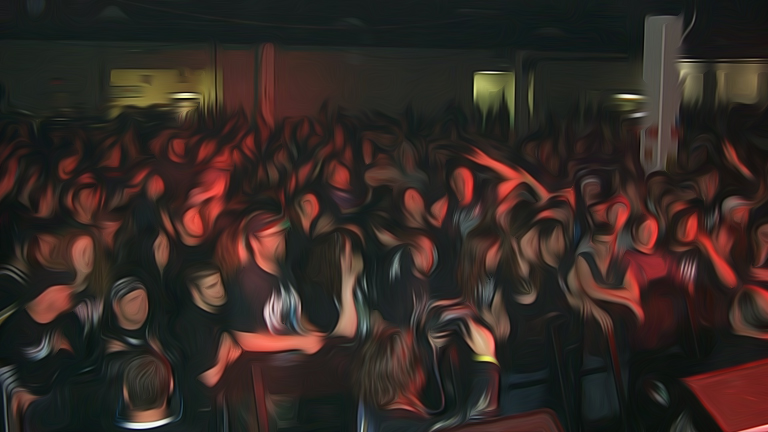 Of course I’ll be referring to the underground death metal scene as that’s the dysfunctional family of mutants I’ve been a part of most my life. I can’t comment on what it’s like being an underground blues artist or what one of those “subway” bands goes through but hey those guys are either in genres that are much more popular or have passers by at least throwing them some dollars or at least some appreciation.

Now, first off… metal sucks. It’s loud, obnoxious, monotonous, blindingly fast, slothly slow, distorted, “you can’t understand what they’re saying”, etc., etc., etc… according to most of the planet which is why I’m personally drawn to it. Yes there’s beautiful melodic metal that can counter that statement but fuck you, shut up, not my point. Point is, metal is absolutely a sub-sub-genre, of rock and roll to be precise. Now, let’s go another sub-genre down (everyone loves those fucking sub-genres “I only listen to blackened Norwegian technical vegan grind – douche“) and here somewhere beneath thrash akin to the big 4 you’ll find death metal and all of it’s sub-genres.

Congratulations! You’ve now found a family of die-hard fuck-ups that are as misunderstood as they are passionate about their cats. What in the fuck would entice anyone to join this bunch of nonsense? Is it purely about the music and it’s aggressive nature? The black t-shirt lifestyle? ( – do not get me fucking started on metal as a trend in clothing) Is it the underlying sentiment of brother/sisterhood?

I don’t know about anyone else but for me a lot of things have drawn me to the metal scene over the years besides our unified love of cats and camo shorts (this was actually way before camo shorts). When I was a youngster in the scene, for me it was primarily about making noise. I wanted to jam and that was it. I wanted to play metal and listen to metal all the time. I still had many other interests but metal was now the soundtrack to them. This was before death metal was invented of course, so we’re talking Ozzy, Metallica, etc.

During my late teens into early twenties the metal scene grew and evolved into ever more distorted and heavier, faster music. I was all-in and was finding myself part of a very cool family of friends that all had one thing in common… our love for metal. By this point I realized that the scene was about much more than the music, that it was about the music and the people you share the love with. I was grateful to be part of a bunch of people that “got it” and those early day’s shows/parties were insane!

Cut to a short time later, I’m deeply embedded in this new genre of ultra fast blasting death metal that we’re all making up rules for and breaking them as we go. These were amazing times. The scene was hungry. The internet was an infant. People weren’t wrapped up in their phones. Shows were a different vibe. I can’t explain it to you really, I can only share a look into the eyes of those of you old enough to remember that says “remember that shit?” On a complete side note. Someone needs to do a fest on a deserted island with no modern technology allowed except for the stage gear. Call it Primitive fest. Hmmm…

So this all sounds like a bunch of fun up to this point right? Even a little fucking sappy at points huh? Fuck you, I ain’t afraid to cry 😛 Seriously though, to this point it is all fun and games. The second you decide to try to make a career out of something it usually takes something out of it. The thing becomes work. Even the most fun, rewarding work is still work and if you’re foolish/brave enough to try to make music your primary income there’s going to be the inevitable danger of you having to treat it like it’s work and not fun music that you happen to be making whenever. The real game kids is of course to play the balancing act and try to have fun while not making any “business” decisions that might compromise your art’s integrity. Easier said than done… IF you care about success. If you only care about making noises and having fun (I lean more towards this and my career reflects it) then you have little worries. Take the ride, see the world, you’ll have some great stories to tell and awesome memories. If you plan to make a career in music then be prepared to sacrifice a lot to make it happen and know that you probably won’t make it happen according to the odds. Not saying don’t do it or you can’t do it, just know the score like a fucking grown up and act accordingly. Either put everything you have into it to get what you want out of it or have a very good day job.

Man, that took a serious turn huh? Sorry, I won’t let it happen again (unless necessary). I probably sound like a downer huh? Fuck you, my weed is weak this week and it’s a weak week (ha! made you read that stupid tongue twister. I own you!)

I’ll get back to this when I get some more uplifting ganja and I’ll have a whole other outlook on everything 😛 Where’s that Nature’s Chemistry “Ghost Train Haze” when you need it?